O Glorious Garber, thank you for letting Minnesota United play FC Dallas after they stopped being good at soccer. Do we have a chance to win? No, but there’s a much better chance that it won’t be a complete blowout. I won’t be in attendance, though, and that’s been a pretty good way for the Loons to win. But this isn’t Minnesota United trash talk; this is about Dallas and their dumb soccer team.

Did you know that FC Dallas started in the league as the Dallas Burn and they had a fire-breathing horse with lightning for legs as their crest? 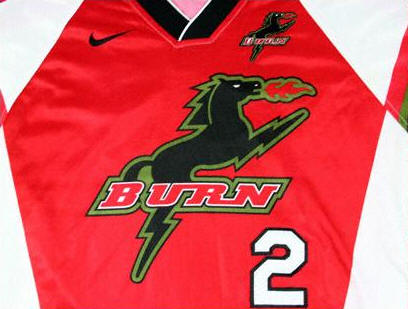 I could have made so much money as a graphic designer if I had been born a decade earlier. I wonder if the Frisco Community Center is still offering whatever art class the person who designed this listed as experience on their resume.

They wisely rebranded as FC Dallas in 2005 but couldn’t change the fact that for all but the first two years of their existence, the best soccer player in Dallas has most likely been Dirk Nowitzki.

The actual city itself is huge and populous but can anyone tell me one thing they would visit for? Name a building, monument, or museum that people want to visit there? The most interesting thing is a small hill and an old building where books used to be stored. We have those here and you don’t have to set foot in Texas to see them. And what if they decide to secede again while you’re there? Now you’re stuck in Texas and I don’t feel bad for you. This all could have been avoided, you history nerd.

Maybe you’re going just to watch an FC Dallas game. That’s also a bad choice. After a good start to the year, los Toros are nine points and a place ahead of Minnesota United. If things go really poorly, they could finish under us. They won the Supporters Shield and the US Open Cup in 2016 and they might finish below a team with a -22 goal differential. While there are few players of note on this team (for the average MLS fan anyway) I will use this as a platform to demand Manny Lagos and Nick Rogers figure out a way to acquire Reggie Cannon and Coy Craft because those are two of the most incredible names I’ve ever heard. They’ve combined for 12 minutes and one shot this year, but just think of the song possibilities…

Other than those two, there’s Kellyn Acosta and Max Urruti. It’s very surprising that they’ve imploded this season with such a star-studded, ready-for-primetime lineup. Their average age has to be somewhere around 25; and while that’s the age that soccer players and writers are at their most handsome, these baby-men aren’t equipped to finish a long and taxing MLS season.

Someday in the future, I’m going to be filthy rich. I’m going to buy FC Dallas, lop off half the name, and move them to Minnesota where they’ll win one championship in 20 years. Until then, watching Minnesota United beat them will have to do.

Going grey early; just like Steve Martin but not nearly as funny. I graduated from the University of Minnesota in 2013 with a degree in Recreation, Parks, and Leisure Studies. I love soccer as well as just about any other sport they play in North America. View all posts by David Baker